The total market is doing a lot better today at $216 billion where we’ve added about $10 billion more than yesterday. Total trading volume is picking up as well at $15 billion with Bitcoin’s market dominance steadily decreasing. This decrease to 51.4% is leading to more altcoins being pumped up. An example is VeChain gaining almost 150% in the past 3 days.

News has been very favorable these past few days. First off, one huge reason why cryptocurrencies are pumping right now is because of Bitcoin futures contracts expiring today. Bitcoin typically sees a drop days before Bitcoin futures expiration days. This had originally happened on a bigger scale back in April when we experienced Bitcoin moving up $1000 in just 60 minutes. Will see something that phenomenal this time around is still unsure but the data is there. Also, shorts are being squeezed as people’s short positions are still being liquidated and we still see the amount of Bitcoin shorts above longs by almost 5000 more positions so this is also an indication that Bitcoin’s price should continue to rise, at least for the short term.

Secondly, one explanation for the recent price drops of cryptocurrencies is because the US dollar is getting stronger. Local currencies like EUR, GBP, AUD are all trading weaker against the USD as the USD is trying to adjust for inflation and amongst this developing trade war. It is interesting to see Foreign Exchange having an impact on cryptocurrencies but this theory is definitely feasible as well. All that being said, the market looks like it’s still trying to consolidate to me so I am going to hold off from getting into bigger positions for now until the market trend is clearer. 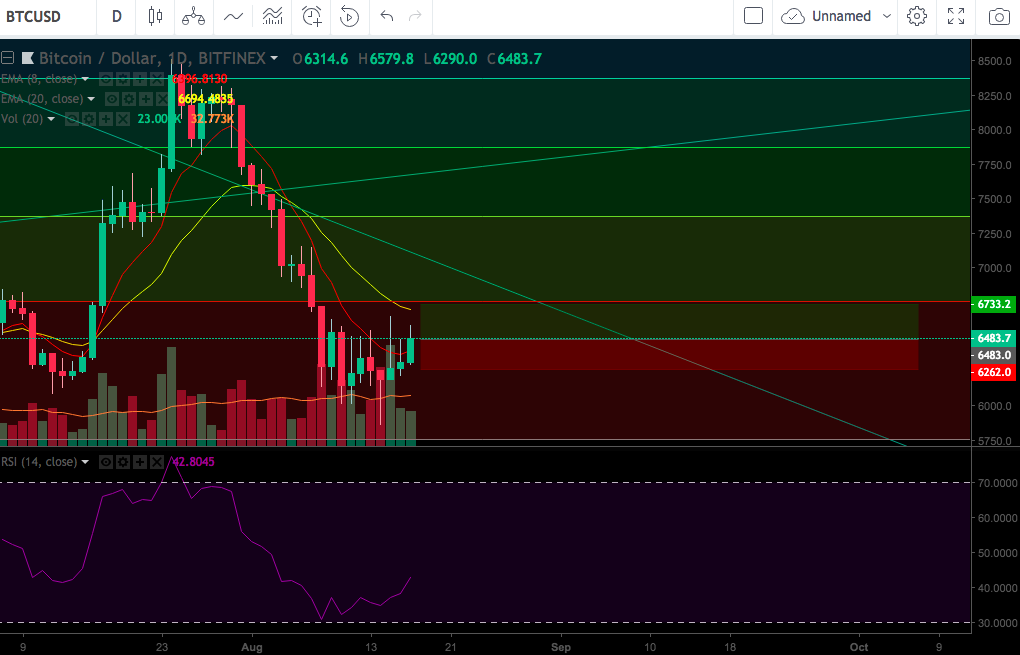 Bitcoin is currently trading at $6481. The good news is that it’s trying to finally close above the 8-day EMA. If it successfully does by 5pm Pacific Standard Time (12:00UTC) then that means we have a good shot of going bull. It’s been consolidating around the $6000-$6500 range for a few days now so it should either break up or down by today now that it’s been testing the 8-day EMA so many times. RSI looks bullish at 42 RSI finally and MACD does appear that it’s getting really close to converging and crossing upwards. The closest level of resistance is staying above $6500 but the one I am looking at is its 20-day EMA and that’s at about $6700. These are key points that Bitcoin needs to surpass in order to prevent itself from crashing down to $5700. It’s better to not look at shorter time scales right now because the price action is volatile. 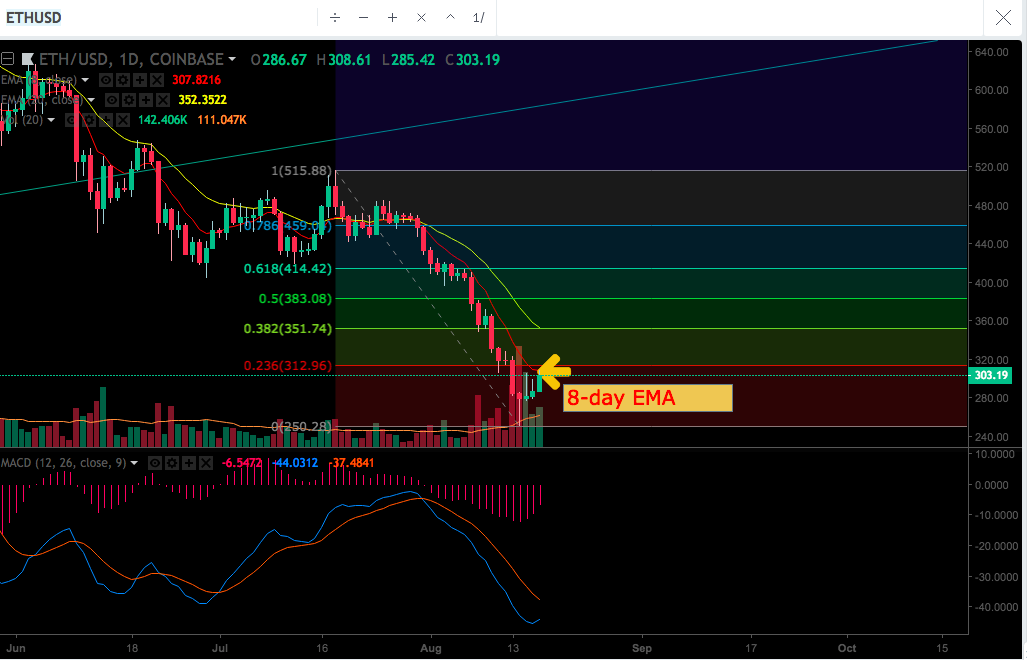 Ethereum is looking like it’s on the cusp of a breakout. There is a lot of pressure building up for its RSI and its MACD on the daily charts looks like it’s going to turn upwards. After a free-fall these past two weeks Ethereum has been recovering pretty nicely. It’s testing its 8-day EMA right now at $305 which it’s been trying to break for the past 4 days. Ethereum would have to break above $312 to renter the 23.6% Fibonacci level indicating a bullish reversal. The 38.2% line is the more important one but that’s still ways away at about $351. 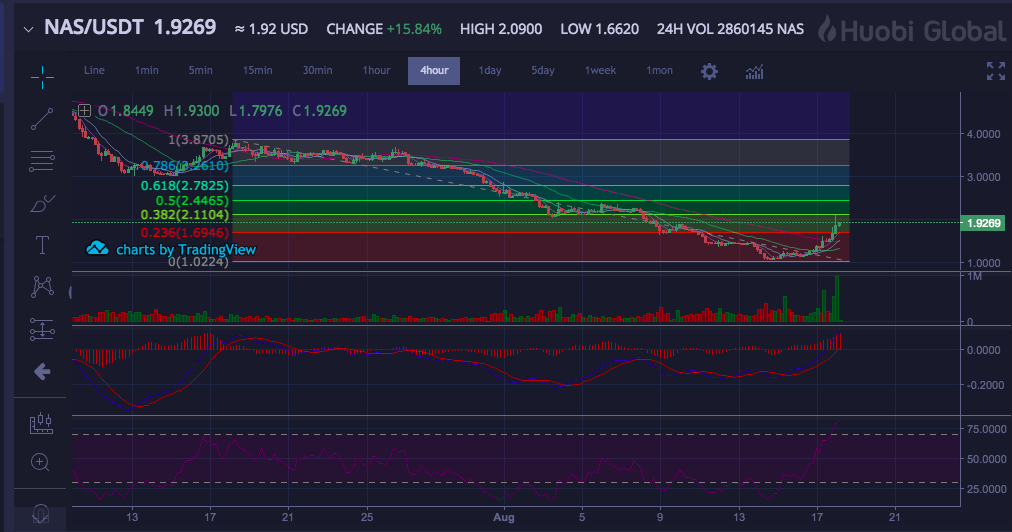 Today, one of the biggest gainers from yesterday was Nebulas (NAS). It rose almost 55% but it seems to have hit a pivotal retracement line at $2.11. This is where the 38.2% Fibonacci level is exactly at which means the bullish reversal isn’t in full play. 4 Hour RSI is showing that it’s overbought right now so a retracement from the top is bounce to happen although the MACD is looking good. That being said, I’ve been super bullish on NAS for a while now and will still be unless their technology changes. Right now, their market cap is around $100 million and I still expect this coin to be at least $500 million which means it’s still a 5x from here. The main reasons why Nebulas hasn’t been as successful as it can are because the whole market is down and the technology does require a lot of working blockchains to be out, but that will change for the positive over time.