[Preston coin headlines] Big news but no change in the market!

Today, the total cryptocurrency market cap is at $190 billion, after dropping from $194 billion yesterday to even $189 billion earlier today most likely due to two major news stories that happened today. Total trading volume is still very low at $11.4 billion which is just about the same as yesterday. Bitcoin’s market dominance however continues to rise at 56.7% and it seems every day that its market dominance is creating a new high (which it has).

During my live stream earlier this morning, two major news stories broke out. The first story is about OKEx’s and OKCoin’s founder Star Xu being arrested in China for alleged fraud by being a shareholder in WFEE coin. Whether or not he will be found guilty on sufficient evidence is still up in there but the fact of the matter is that OKEx is arguably one the highest traded exchanges in the world being either #1, #2, #3 consistently. Since the news broke out, there was 3% less trading volume throughout the exchange. This might not be a big deal in the end but more of an indication that China is continuing to crack down on every element of cryptocurrencies. What should also be noted is that even though China is desperately trying to clamp down on cryptocurrencies, people are just finding different alternatives to trade, by either moving to jurisdiction friendly zones like Malta or just going through VPN. Unless China bans VPN altogether, I find it difficult for all of cryptocurrencies to be banned.

The second news story that was undoubtedly massive was that a New York judge who ruled over a case involving the sale of a token security, has ruled that cryptocurrencies may fall under securities law. The actual case involved someone dealing investment contracts for real estate and diamonds in which he did not actually have any assets to back it up with. Now, in this particular instance, the judge is ruling in terms of the case but this case may set precedence for future rulings pertaining to cryptocurrencies and obviously initial coin offerings. To decide this, the barometer that is used is the Howey Test. If you aren’t familiar with the Howey Test, it’s basically four parameters that deciphers whether or not something is an investment contract. Here are the four criteria:

If an investment contract satisfies these four requirements then they are classified as securities and should be under SEC jurisdiction. So, as you can see, most ICOs are securities. Personally, I’m a fan of true decentralization where there is no government intervention or possibility of censorship. However, most people may disagree with that sentiment and argue that we need regulation. At this point with cryptocurrencies being so low in prices this may be the necessary compromise that will be needed. Some may be worried about ICOs being regulated under securities law, but trust me, this will be a good thing for everyone in cryptocurrency. Once this case has set the tone for how ICOs will be treated, I believe some investor confidence can return.

ICOs have just survived their second worst month in funding in August, only behind July’s amount raised which was just under $1 billion dollars after raising $16 billion in the first 6 months of the year. What could be happening is a shift into security token offerings, that in which we should be expecting. Raising capital in the future with tokens is still something I believe in that will change the world, but the fact of the matter is this: we might need more regulation if we ever want progress with a tokenized economy.

Currently, Bitcoin is trading at $6298. Bitcoin hit $6400 but then is now consolidating here. My prediction still stands, I believe we going to go down to $6000-$6100 before bouncing back up and the consistent trend line rejection is confirming my intuitions. Still, the amounts of short positions is almost 50% more than the long positions still, so I would like to remind you all again: a short squeeze will come causing sharp volatility in price upwards briefly. Daily RSI is confirming this too, with a rejection at the 40 RSI, we are technically still bearish so I know that $6400 is going to be a point of resistance. My stance remains: buy between $6000-$6100, stop loss at $5750, take profits at $6450. The risk to reward ratio is about 1.08 with 5.76% risk for 6.25% gain. 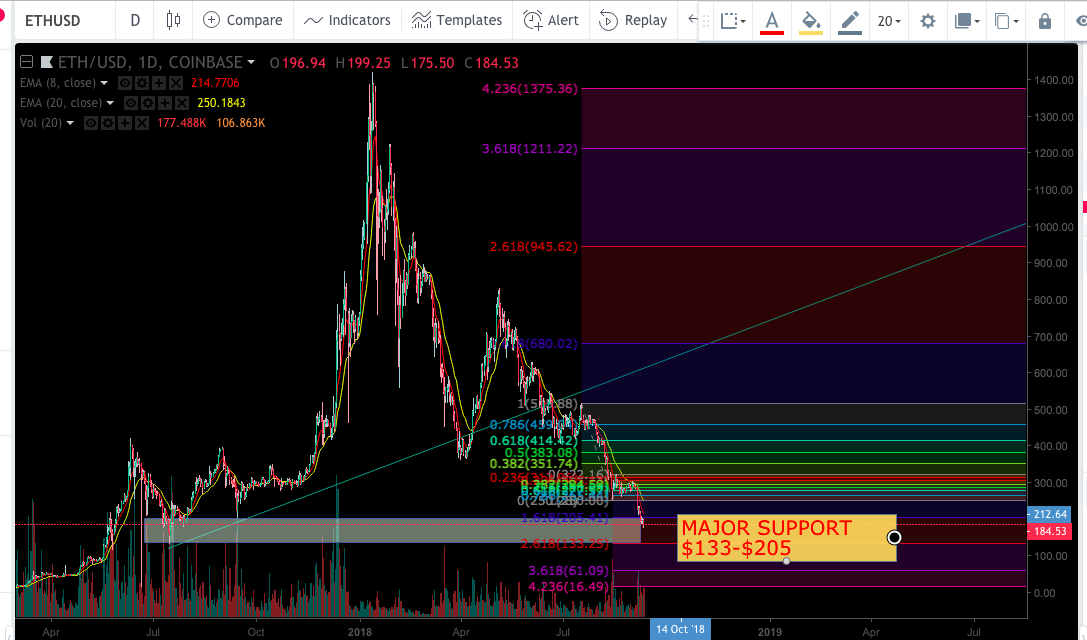 Ethereum continues to take a hit and I’m not surprised. When I drew my Fibonacci levels days ago, I had said two major support levels were between $205 and $133. Because it broke $205, it is very likely we are going to retest $133. From a fundamentals perspective, Ethereum is very bearish due to lack of utility and functionality not being used. Most of the network is being used by CryptoKitties which is hardly the best use case for its blockchain technology. Ether is currently at $184 with its RSI showing very oversold, meaning that a reversal may happen soon; being that it’s at 21 RSI right now. I would not want to enter this nor any other altcoins confidently yet until Bitcoin starts its movement upwards.